Meet Squeake! The first-ever balloon pet that’s inflated with personality! Hell WOW, you as he comes to life just like a real pup! Squeake is so interactive and loves to play with you! This very playful toy responds to your voice, is full of sound and movement, and looks just like a real Balloon Dog! Watch him sit and stand as you pet his head or tickle his tummy to make him happy!
Squeaker comes with a range of fun accessories for you to interact and play with. Use his Pump to feed him. Place the Pump in his nose and hear him inflate! But be careful, when he’s full he may pee or fart! Squeaker loves his Squeaker Toy and gets very excited when he hears it! Use his Squeaker Toy to train him to sit or beg!
Feed him, teach him, even “POP” him with his Pin and watch him deflate! You’ll be blown away at all his reactions and what he can do! Squeake is your interactive balloon best friend!
Includes: 1 x Squeakee, 1 x Pin, 1 x Pump, 1 x Squeaker Toy, 1 x Instruction Manual.
Features:

Note: Video is for Demonstrational purposes only 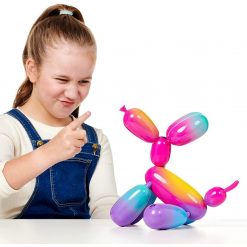