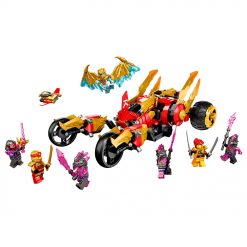 Ninja fans aged 8+ can recreate thrilling action from the NINJAGO: Crystallized TV series with this supercool Kai’s Golden Dragon Raider (71773) playset. It features a multi-terrain vehicle with a cockpit, 2 cannons with 4 shooters, and golden dragon blades. By folding the Raider’s back wheels, it can change from road mode into walker mode to move like a creature.

This building set is crammed with 7 Minifigures: Golden Kai, Golden Dragon Zane with golden dragon wings, their ally Skylor, and a set of villains for kids to play out battles against General Mister F, Vengestone Brute, and 2 Vengestone Warriors.

NINJAGO toys encourage kids to put down their screens and dive into an all-consuming world of fantasy action. Here they can join forces with their brave ninja heroes to battle the forces of evil with a fantastic collection of playsets including mechs, cars, jets, dragons, and temples.

Note: Video is for Demonstrational purposes only

Recommended Age: Suitable for 8 years and above